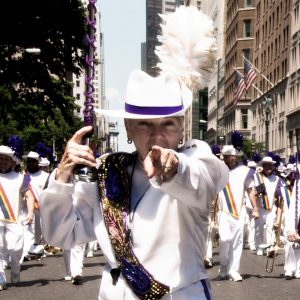 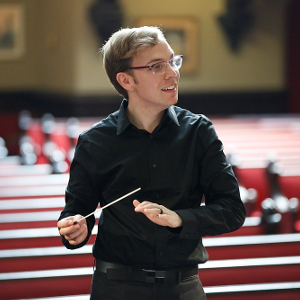 Marita Begley is both marching director and a drum major in the Queer Big Apple Corps (the new name of the Lesbian & Gay Big Apple Corps), and she has served in these leadership roles for 17 years and 20 years respectively. Under her baton, the band has won more than 50 awards in civic parades and LGBTQ+ pride parades from Washington, DC, to Providence, RI; it also made history twice: The QBAC (under the name LGBAC) was the first LGBTQ+ band to perform in the Macy’s Thanksgiving Day Parade (2020) and the first LGBTQ+ band to march in a Ticker-Tape Parade (Operation Welcome Home, 1991).

For two decades, Marita has led the Big Apple Corps in events large and small throughout New York City and the East Coast. Under her direction, the band has tripled in size, attracted corporate sponsorship, quadrupled its donor base and annual budget, and raised the number and stature of its appearances, performing in iconic New York City venues (Madison Square Garden, MoMA–the Museum of Modern Art, CitiField, the High Line, Times Square and Herald Square, Brooklyn’s Barclays Center, and the New York Botanical Garden) and at iconic events at home and on the road (the Hambletonian Race in the Meadowlands, the Coney Island Mermaid Parade, the New York City Marathon, FireWater in Providence, and the Syracuse State Fair). With its pop repertoire and splashy crowd-thrilling routines, the band is a hit with parade organizers (and audiences) everywhere from legendary NYC venues and small-town Fourth of July parades in Montclair and Asbury Park, NJ, to children’s Halloween parades in Manhattan and Triple A ball games in Wappingers Falls, NY.

In 2014, Marita—along with fellow honorees Jason Collins, Lee Daniels, and Isaac Mizrahi—accepted the Stonewall Foundation’s Vision Award for her years of leadership as marching director and for her impact on the LGBTQ+ community via the band’s out, loud, and proud artistry. She dedicates every performance to the memory of her beloved parents and godmother and to the amazing members of The Queer Big Apple Corps. She lives in Glen Ridge, NJ, with the love of her life, wife Ana Del Campo, and their dog and too many cats (and band trophies).

A native of South Africa, Henco Espag came to the U.S. in 2007 to further his musical studies at Berklee College of Music.

Henco has worked on numerous projects as composer, arranger, orchestrator, conductor, accompanist, music director, and session musician. He has been commissioned by choirs to write music that received international acclaim, including an arrangement for the World Choir Games in Xiamen, China and an original composition for the National ATKV Choir Competition in Cape Town, South Africa. Henco received the Georges Delerue Scholarship for outstanding achievement in film scoring at Berklee College of Music and was also awarded two bursaries from the South African National Arts Council. He also worked as an orchestrator for the feature film The Runner from Ravenshead by Little Crew Productions.

Henco was a part of the Musical Theatre Department at Westminster College of the Arts at Rider University, where he served as faculty, staff accompanist, vocal coach, and music director. He also serves as the new Music Director for Judson Memorial Church at Washington Square in Manhattan.

As music director and conductor, Henco has worked with directors Robert Johanson and Norbert Joerder, and performers Sally Struthers and Tony Award-nominee Meg Bussert. Henco served as the resident music director for the 2013 and 2014 seasons of Surflight Theatre, a professional regional theatre on Long Beach Island, NJ.

Henco composed a full scale-musical that had its first public reading in the Fall of 2015 at Rider University and he is also working as composer with librettist John Olin on a new American opera.